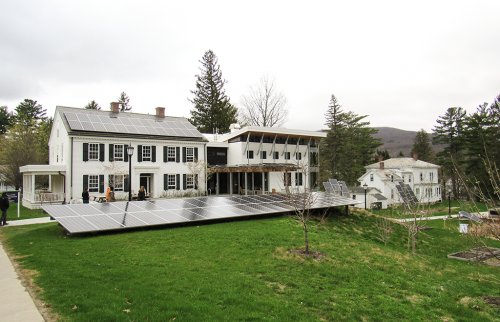 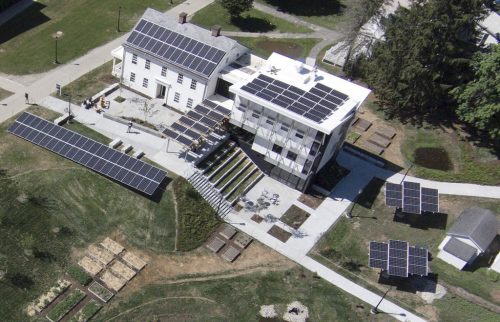 Williamstown, Massachusetts. On April 21, the Northeast Sustainable Energy Association (NESEA) organized a tour of the Williams College Kellogg House as part of NESEA’s Building Energy Pro Tour Program. The Kellogg House is a 1794 building that received a deep energy retrofit and a newly constructed expansion to serve mixed uses at the College. The project was built to the stringent standards of the Living Building Challenge. The Living Building Challenge is a green building certification program and sustainable design framework that visualizes a built environment where living buildings give more than they take, creating a positive impact on the human and natural systems that interact with them.

The facility is operating the first licensed rainwater collection and treatment system in Massachusetts, and one of only a few non-chlorinated public water providers in the United States. Gray water is treated on site in a constructed wetland. The building is designed to produce 100% of its energy through photovoltaic arrays. 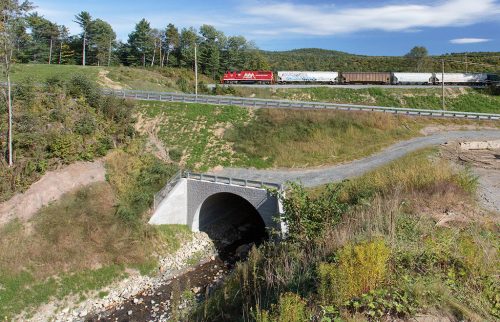 For years, deteriorated, undersized culverts contributed to flooding of US Route 5 and jeopardized the integrity of the roadway and Washington County Railroad (WACR) embankments. Working with VTrans, the design-build team of DuBois & King and Engineers Construction, Inc., designed and constructed 32-ft-wide by 16-ft-high, cast-in-place, reinforced concrete arch structures beneath US Route 5 and the rail line to convey Manchester Brook beneath the embankments. 70-ft-deep braced excavations were required to construct the new 144-ft and 128-ft-long structures. A curved section open to daylight connected the two buried structures. The total length of the structure is 330 ft. The new structure improved hydraulic capacity by 25 times. Temporary bridges maintained rail and roadway traffic during construction. 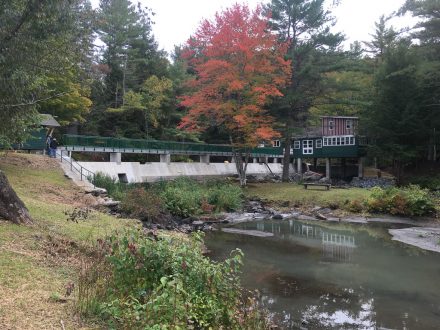 The Lake Fairlee dam has impounded the 427-acre lake for over 75 years. The low-hazard dam was found to be in a progressive state of failure for more than 40 years and the three abutting municipalities became concerned about potential loss of revenue from declining lakefront property values, should the dam fail. Complicating factors included the presence of a camp located on top of the dam and the likelihood that a complete failure of the dam would negate the possibility of reconstruction, due to current regulations. An in-kind replacement to the existing structure would change the dam’s classification to high-hazard because the camp used the dam as its foundation. The “permit-able” concept required design and construction of two separate structures: a new pier and wall foundation for the camp and a new cast-in-place concrete gravity dam which also functions as support for a new walkway to the camp. The project resulted in the construction of the only new non-snowmaking dam in Vermont in recent memory and the preservation of property values and a regional recreational resource. 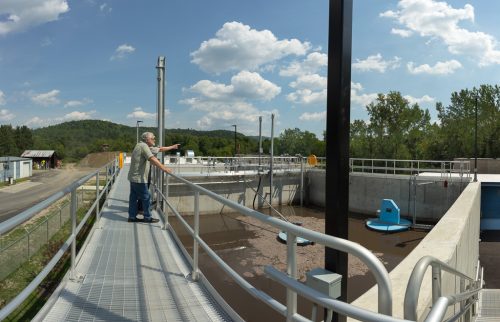 The 40-year old Randolph Wastewater Treatment Facility, originally designed for a 20-year service life, was past due for a total treatment process change and facility upgrade. Project objectives included: state-of-the-art treatment process upgrade, design capacity for nitrogen removal, improve operations efficiencies and reduce operating costs, address issues with the location in a floodplain, and develop a demonstration facility that could be accessible for educational purposes. The activated sludge treatment process was updated with sequencing batch reactor (SBR) technology and the treatment process was designed with the capability of meeting a total nitrogen limit of 7.0mg/l requirements. Existing facility buildings were repurposed and flood proofed saving project costs and preventing future damage from flooding. A completely overhauled SCADA controls system was designed for operational efficiencies. The facility was designed for ADA compatibility and accommodates tour groups from regional educational institutions. Wastewater treatment capabilities had to be maintained during construction and sequencing of construction activities were developed to allow the treatment process to continue without interruption. 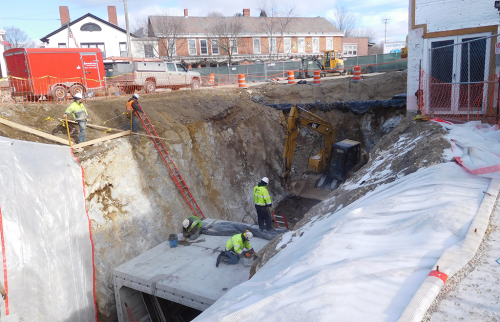 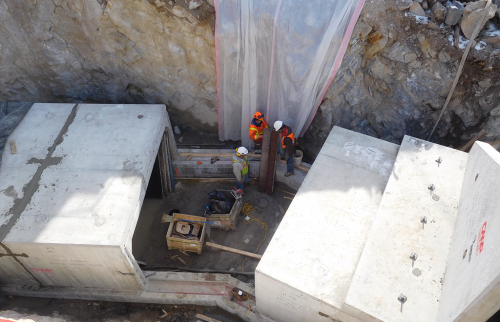 Significant damage occurred to the Brandon, Vermont downtown area when Tropical Storm Irene caused flooding and overtopping of US Route 7. The floodwaters damaged the town offices, Gazebo Park, portions of Briggs Lane and US Route 7, as well as private and commercial properties. DuBois & King engineers provided design of an overflow culvert to prevent future potential of the Neshobe River overtopping in the congested channel. The overflow culvert will reduce impacts from future high water events by redirecting up to the 500 year storm event away from the choke point that goes under Route 7, businesses, and the town offices. The Town of Brandon received a Hazard Mitigation grant of $2.55M from FEMA to fund the construction of the culvert crossing under US Route 7.

Detailed hydraulic and hydrologic analysis was performed to guide the development of the overflow structure. Designed to accept overflow from the Neshobe River, the new 278-ft, 6-ft-high, by 12-ft-wide three-sided concrete precast structure has a sloped tapered inlet, horizontal and vertical bends, and an integral retaining wall energy dissipater outlet baffle. Extensive, detailed design was required to fit the buried structure into the constrained site—with adjacent unstable buildings, existing utilities, and shallow ledge—to prevent impacts to abutting structures and property. 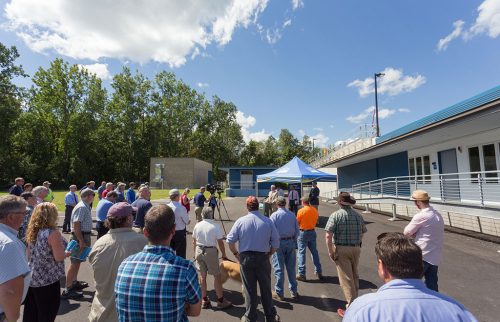 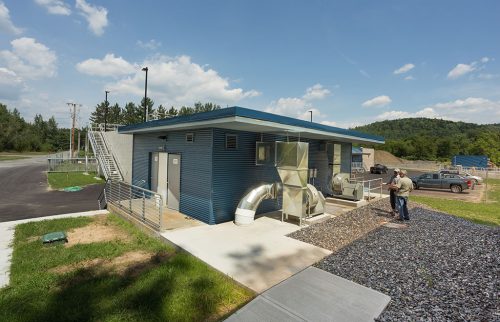 The Town of Randolph, Vermont, officially opened their new wastewater treatment facility at a ceremony on September 1. The facility and treatment process replaced a 40-year facility that had reached the end of its useful life. The construction, which began in 2013, was funded by $8.8M of Federal grants and loans through USDA Rural Development. Ted Brady, USDA Rural Development State Director for Vermont and New Hampshire, joined town officials and community members to celebrate the completion of the project. Brady noted that USDA Rural Development funded this project through its Water and Environmental Program that provides support to municipalities that seek to improve the water, wastewater and stormwater infrastructure serving their communities.

DuBois & King engineers began design on the project in 2010. The new facility is one of the first in Vermont designed to comply with new state and federal requirements to reduce the amount of nitrogen discharged to the Connecticut River. The new facility will retain the existing permitted capacity of the previous facility and will serve 2,000 homes, community institutions, and the Vermont Technical College and a new senior living campus located in nearby Randolph Center.

Wastewater treatment will be accomplished using Sequencing Batch Reactor (SBR) technology. As cost saving measures, the design included reuse of existing infrastructure from the previous facility. An inverted siphon was designed to convey 40% of the total wasterwater flow entering the WWTF, eliminating pumping and reducing long-term operating costs. An existing pump station serving a portion of the collection area was downsized as a result of rerouting the majority of flows through the siphon, further reducing energy costs.

Magazine and KeyBank, recognize five Vermont businesses that have experienced the greatest growth over the past five years in five different business categories. This year, DuBois & King has been recognized by Vermont Business Magazine as one of the five fastest growing Vermont businesses in the Employee Owned category. Categories for this year’s awards are: Employee Owned, Services, Manufacturing, Technology, and Wholesale. The award ceremony will be held on September 12 at the Burlington Hilton.

“DuBois & King’s growth over the last five years is directly attributed to its employees,” says President Jeffrey Tucker. “The result of great people delivering great service is repeat business and growth. DuBois & King has been fortunate to have attracted and retained a dedicated, engaged, intelligent, and enthusiastic team of professional service providers and support staff.”